The Order of the Gilded Eye

A War of Fish 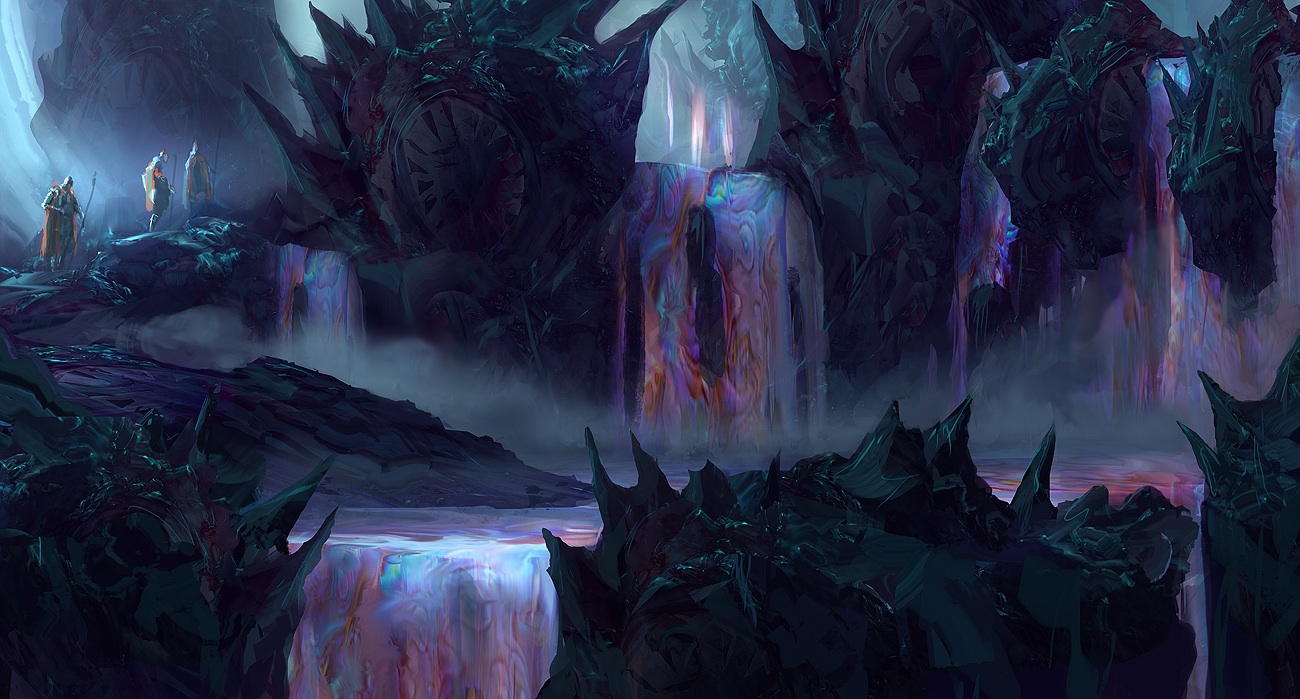 The Last Leg of the Journey

Nearing Sloopbludop, the intrepid party had their wits tested as they entered an endless cavern full of discarded bones and smooth rock. Chilling shrieks and gibberings haunted their every step, the escaped slaves unable to fathom what was making the noise and unable to make out the source as it echoed around them. They clutched at their ears, unable to drown out the noise.

Topsy & Turvy were driven to their limits, and when it quieted down couldn't handle another night of Prince Derendil's whining as he sobbed over the grubs and mushrooms they had scavenged.

"You know what I ate everyday in my kingdom?" the quaggoth began.

"You aren't an elf!" both gnome children screamed at him in unison. "You're a quaggoth! Stop going on about the surface!"

Prince Derendil flew into a rage. He slammed both of the twins into the ground, bit at them and clawed them. As Jimjar made a wager with Wolfe about who would die, Corinne leapt to their aid and calmed the situation.

As she talked the quaggoth down the others took silent note that the twins were unscathed. The brawl should have at least bloodied them… like with the umberhulk nearly a tenday earlier.

"We're leaving!" Topsy announced, unable to stop shaking. Turvy pushed her away and Corinne who was only trying to help.

"What are you trying to hide?" Corinne asked Topsy as she faked a limp. Topsy wouldn't come clean to her, but simply stated that nobody would accept them if they discovered their secret. However, Corinne was kind enough that Topsy and Turvy stayed with the group instead of disappearing. 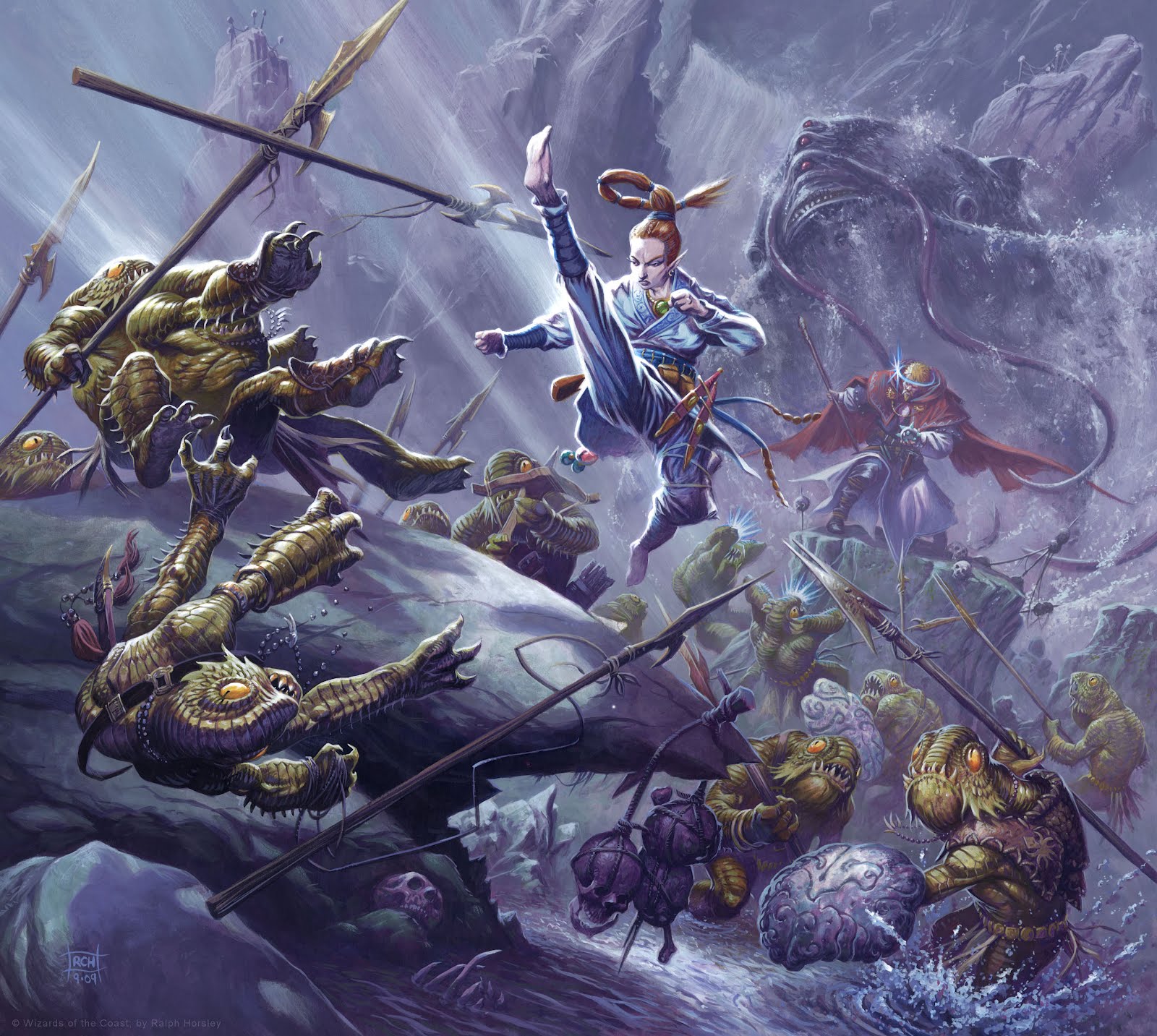 The group came within a couple hours of Sloopbludop when an endless sea of muck lay before them. As they bickered about whether or not to proceed through the sludge, a cake batter made from the waters of the Darklake and sulferous springs in the area, Corinne noticed in the dismal distance behind them a magical light. Faerie fire. The drow were closing in.

"But my boots!" Nashua grumbled, "and my fur!" Prince Derendil added to the constant complaints.

An hour into the muck, forced into it by fear of capture, a heavy force of kuo-toa egged on by a much larger brute threw nets over the group. As fast as they could evade them, the group found themselves caught up tighter and tighter.

As they debated how wise it was to try and appeal to these fishes, chanting the name of the mysterious Deep Father, Leemogoogoon, the twins let out an ear-piercing shriek. Their bones snapped and splintered as they transformed into giant rats the size of dogs.

Suddenly Corinne realized what they hadn't told her. They were wererats, and now with the phase of an unseen moon miles and miles above them shining on the surface of the hidden world above, they had transformed.

"Blibdoolpoolp!" shouted an unseen voice. Several kuo-toa charged their brothers, stabbing them with bloody spears. Evil spirits encircled everyone, the spirits a blur of red eyes and claws as they hacked and tore their kuo-toa captors to bloody ribbons.

It was Corinne, who in the chaos broke free and ran to the twins and released them. They couldn't communicate with her, but they trusted her and stayed with the group even though the rat was out of the bag.

The leader, Ploopploopeen or Ploop (to keep his name simple) explained to them that he needed their help. He was the religious leader of Sloopbludop and right now they were at odds. His own daughter worshipped the inferior Deep Father, and was intent on destroying all of them who worshipped the Sea Mother.

He gave them a propoition. Help us by posing as sacrifices, and help them to kill his daughter and her followers when the time was right. There would be great reward.

"You expect us to believe you?" asked one.

The kuo-toa archpriest walked around them as he spoke, his followers following him like a school of fish. His unblinking eyes were unnerving.

"Volunteer, or be forced. Makes no difference to me. You are a gift from Blibdoolpoolp, and I intend to use you."The group spoke to one another in the common tongue, and agreed to the plan on the condition that Nitsuj be left to wander about. Ploop shrugged in the way that a fish shrugs, and agreed.

Managing to keep the peace in a otherwise hectic group of misfits, and accepting wererats for who they are deep inside.

Even though he’s whiny, willing to get his nice magical (unisex) boots wet.

Making a doll out of Nashua’s hair during a watch, and petting it. Always petting it.

Showing uncommon restraint… he didn’t punch a single person in the group. The demonic mace is becoming unhappy again.

Ascendant campaigns can view previous versions of their pages, see what has changed (and who did it), and even restore old versions. It's like having a rewind button for your campaign.

We've already been saving your edits, so if you upgrade now you will have instant access to your previous versions. Plus, you have our no risk refund guarantee , so there's nothing to lose.

A Touch of Madness We're all mad down here

Demogorgon As if things couldn't get any worse...

I'm sorry, but we no longer support this web browser. Please upgrade your browser or install Chrome or Firefox to enjoy the full functionality of this site.